Erika Jayne is Dumped By Lawyers Due to Lack of “Trust,” Evidence Shows RHOBH Star is “Refusing to Cooperate”?

On the heels of The Housewife and the Hustler, which put a spotlight on crimes allegedly committed by the ex-couple against his former clients, creditors, and other lenders, the Real Housewives of Beverly Hills star’s counsel has requested they be removed from the cases, citing a “fundamental and material breakdown.”

“BREAKING NEWS: Erika Girardi’s attorney moves to withdraw from representation in the Girardi Keese bankruptcy including against the Special Litigation Counsel. Motion below,” attorney Ronald Richards wrote in a tweet shared on June 15.

BREAKING NEWS: Erika Girardi’s attorney moves to withdraw from representation in the Girardi Keese bankruptcy including against the Special Litigation Counsel. Motion below. https://t.co/3halBxopi9

Then, in a second tweet shared less than 30 minutes later, he confirmed the legal team was also pulling out of the ongoing proceedings against Thomas, who was forced into Chapter 7 bankruptcy in late 2020.

“Erika Jayne‘s counsel is moving to withdraw in the Thomas Girardi bankruptcy as well. Here is a copy of the motion below,” Ronald wrote, noting that The Housewife and the Hustler was “not flattering,” “sickening,” and “hard to watch.”

Breaking: Erika Jayne @erikajayne‘s counsel is moving to withdraw in the Thomas Girardi bankruptcy as well. Here is a copy of the motion below. The Hulu special also aired last night. It was not flattering / in fact, sickening in many people’s opinion. Hard to watch the pain. pic.twitter.com/RyoSDoIBvb

When one of Ronald’s followers wanted to know more about the recently filed motions, the attorney explained there was mounting evidence against the RHOBH cast member that suggests she knew much more than she’s led on.

See also  Rent is out of reach for minimum-wage workers in every state. New study shows how far out of reach

“She was facing evidence that shows she is more than just an innocent spouse, is refusing to cooperate with her attorneys, etc. This is an extraordinary step,” he explained. 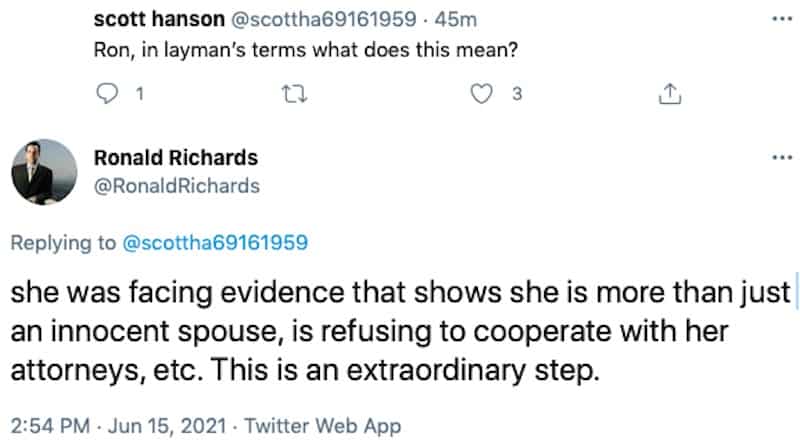 In one of the motions to withdraw their representation, Erika’s attorneys confirmed a “fundamental and material breakdown” had taken place between them.

Also in the motion, it was confirmed that Erika had learned of the withdrawing of her legal counsel on June 14, the same day the Hulu/ABC documentary premiered, and she was advised to obtain a “replacement counsel.”

“No later than June 14, 2021, Ms. Girardi learned of the Firm’s withdrawal and the Firm’s willingness to facilitate the transfer of Ms. Girardi’s client file to new counsel,” the motion stated.

The Real Housewives of Beverly Hills season 11 airs Wednesdays at 8/7c on Bravo.

The Education of Melvyn Bragg

The Education of Melvyn Bragg

What Old Money Looks Like in America, and Who Pays For It

Britney Spears’ Instagram Slams Paparazzi for ‘Embarrassing’ Her On Vacation – But Do U Really Think She Wrote This??