County Championship: Which six will progress to Division One title battle?

The County Championship enters the final round of its new two-phase format from Sunday.

By Wednesday, the number of teams that can become this season’s champions will have been reduced from 18 to just six.

Under the new format for 2021, the top two sides in each of three groups progress to Division One, carrying forward half the points from the matches played against each other.

A further four rounds of games in September will then follow against those they have not already met, with the top side in the Division One table claiming the County Championship title last won by Essex in 2019.

The top two will then head for Lord’s in late September for a one-off game for the Bob Willis Trophy, also won by Essex last summer.

The remaining 12 teams that do not go into Division One will move into Divisions Two and Three, in which teams will also play another four matches. 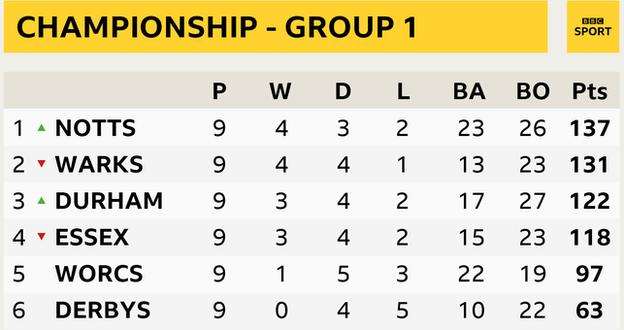 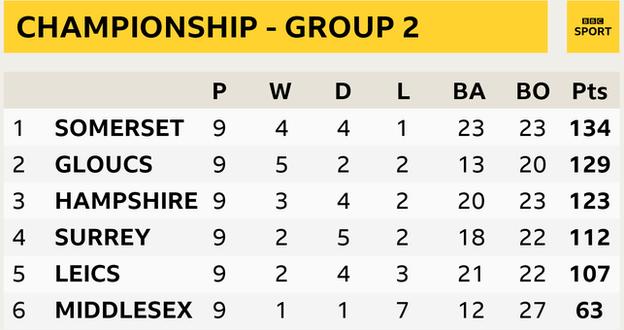 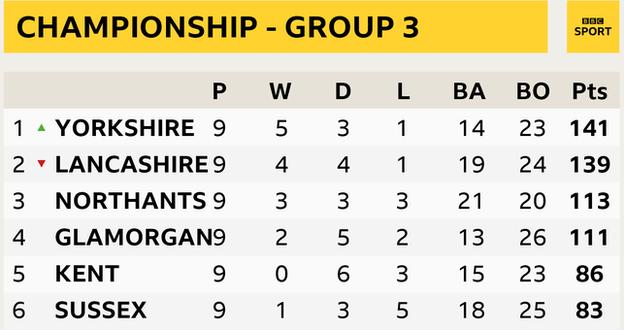 Who is already through and who is still in contention?

One thing we already know before the final round even begins is that Roses rivals Yorkshire and Lancashire have qualified for Division One from Group Three.

But, there is still plenty to play for other than bragging rights during their meeting at Emerald Headingley.

Yorkshire will be desperate to avenge their innings defeat by Lancashire at Emirates Old Trafford in May as the Red Rose will currently take at least 11 points into the next phase.

Yorkshire only picked up a point from that match when they were on the back foot from the first morning as Lancashire reduced them to 41-7.

Qualification from Groups One and Two is still up for grabs.

After beating Derbyshire by an innings and 36 runs inside three days, Nottinghamshire have put themselves in pole position as the leaders of Group One.

They must avoid defeat against Durham at Chester-le-Street to get through, but a defeat could leave them vulnerable.

A rain-affected draw at Edgbaston between Warwickshire and Durham has left both still sweating over their chances.

But the big headline could be champions Essex missing out on being able to defend their title in September.

They will need to beat bottom-placed and winless Derbyshire, probably with the maximum 24 points and hope that both third-placed Durham and second-placed Warwickshire do not win to stand a chance of overhauling them.

The Bears, who travel to New Road to play Worcestershire, start the round with a nine-point advantage over Durham.

Warwickshire will need a maximum of 16 points against Worcestershire to guarantee their top-two place.

Finally, Group Two remains intriguingly-poised going into the last round.

Leaders Somerset were frustrated by Leicestershire’s dogged batting and the weather as they drew at Taunton, while Gloucestershire bounced back with a victory against Middlesex to put them five points behind in second.

Somerset travel to The Oval to face a Surrey side, who thanks to Hashim Amla’s incredible last-day rearguard against Hampshire, still have a small chance of qualification.

Somerset know that 14 points, which could come from a draw, will see them through.

But the most crucial fixture will take place at Cheltenham where the winner between Gloucestershire and Hampshire will undoubtedly qualify.

How crucial could Gloucestershire’s draw against Hampshire at the Ageas Bowl earlier in the competition prove?

On that occasion, last pair Josh Shaw and Dom Goodman survived for 17 overs to avoid an innings defeat.

Hampshire will hope that their four draws from nine matches will not count against them.

How quantum bird brains could give us superpowers